In Stockholm, in September – for the first time in Sweden – there was an opportunity to try ice hockey for people with visual impairments. The idea comes from Canada, where "blind ice hockey" has existed since the late 70's. The one who came up with the idea to introduce this also in Sweden was Lukas Jakubov, who three years ago became visually impaired and was diagnosed with LHON, Leber's Hereditary Opticus Neuropathy. Lukas decided to start a project together with the association LHON Eye Society to start hockey training for the visually impaired while spreading information about LHON.

Lars Kinnunen, chairman of the LHON Eye Society, says that the project has two purposes: to get people with visual impairments to get active and to give them the opportunity to try something they didn´t think was possible to do because they have poorer vision than the average of the population.

One autumn evening, LHON, with the help of Stockholm Parasport and Göta Traneberg IK, was able to gather around 20 people of different age and with different eyesight, to try playing ice hockey. It was a nice evening, the event turned out well, and LVI is a proud sponsor of the documentary that was made. LVI's CEO Henrik Blomdahl explains:

–   For us at LVI who work daily to make everyday life easier for people with visual impairments and give them the opportunity for increased quality of life, it was natural to sponsor the film about the hockey project. It feels good to participate in projects like this that hopefully give long-term results. Sport is very important for both community and health, which is of great importance for people's quality of life.

The hope with the project is to create a recurring activity, a training group regarding hockey for the visually impaired, and in the long run to be able to meet teams in other countries. Feel free to follow the development of the project on lhon.se 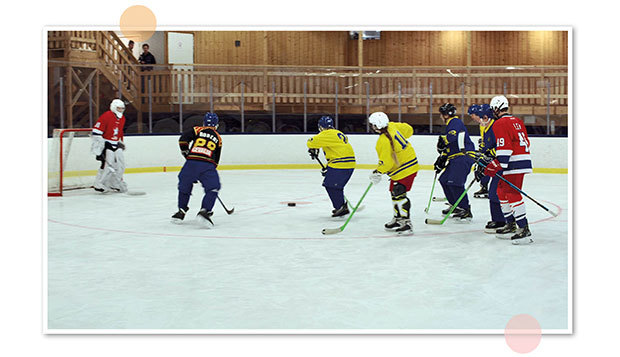 How to play "blind ice hockey"

The puck used is seven times larger than a regular puck and it rattles when it slides over the ice so that the players can locate it. When the goalkeeper hears a player or puck approaching, he strikes with the club in the ice so that the player can hear where to shoot. At the same time, the puck rattles and the goalkeeper tries to protect the goal.

Watch the documentary about the hockey project by clicking here or on the image below!

LHON stands for Leber's Hereditary Optic Neuropathy and is an unusual, hereditary disease. It affects the optic nerve and causes the vision to become blurred or disappear completely in the middle of the visual field.

LHON Eye Society is a non-profit organization for people with LHON. The association supports people with the disease and their relatives, disseminates information about the disease both among healthcare professionals and the general public, and supports research in the field.

Read more about LHON and the association at lhon.se.

you are being redirected to "Company". if you have items in the cart, they will be removed. do you want to continue?

Welcome to receive a free quotation without obligation.